Kerala, popularly known as ‘God’s Own Country’ is also the home of world-renowned temples , churches and mosques. 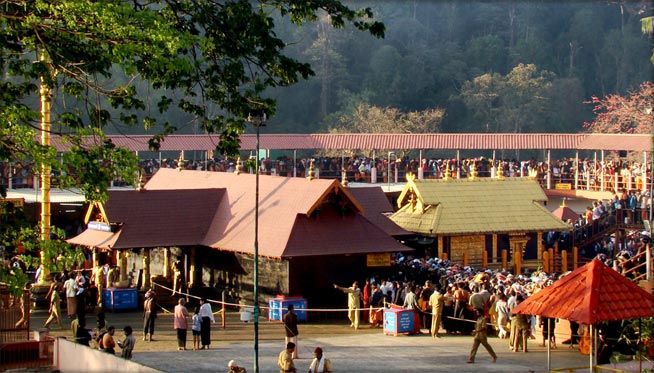 Sabarimala is the most famous Hindu pilgrimage centre in Kerala and India. At a distance of 70 km from Pathanamthitta, this temple is dedicated to Lord Ayyappa. It is one of the most visited pilgrim centers in the world with an estimated 45 - 50 million devotees every year. It is the most popular center of pilgrimage in Kerala state.

Vavar (pronounced Vaa-var= "vav-vindavar")meaning vavu = "moon" vindavar= "who splits", also known as Vavaraswami. There is a shrine dedicated to Vavaraswami at Sabarimala, as well as Varaswamis mosque at Erumely next to an Ayyappa temple. The devotion of Vavaraswami to Ayyappan and the key role that the Islamic Masjid has in the Ayyappa Pilgrimage, highlights the communal harmony in Kerala. The devotion of Vavaraswami also highlights the relevance of Ayyappa devotion for members of all faiths, and the equality shown to all, whether they are Muslims, Hindus or Christians.

At a distance of 81 km from Kochi, 55 km from Athirapally, 69 km from Palakkad, 113 km from Kozhikode, 114 km from Coimbatore, 279 km from Trivandrum and 280 km from Madurai, Thrissur (also known as Trichur) is a city situated in central Kerala. It is one of the most popular places to visit in Kerala and also a famous pilgrimage site in Kerala state. This is one of the ideal weekend getaways around Kochi & Coimbatore.

Parumala is a small stretch of land on the shores of the river Pampa. Malankara Metropolitan Joseph Mar Dionysius wanted to establish a seminary in this area.Temporary church in Parumala was rebuilt by Mar Gregorios and consecrated in 1895. 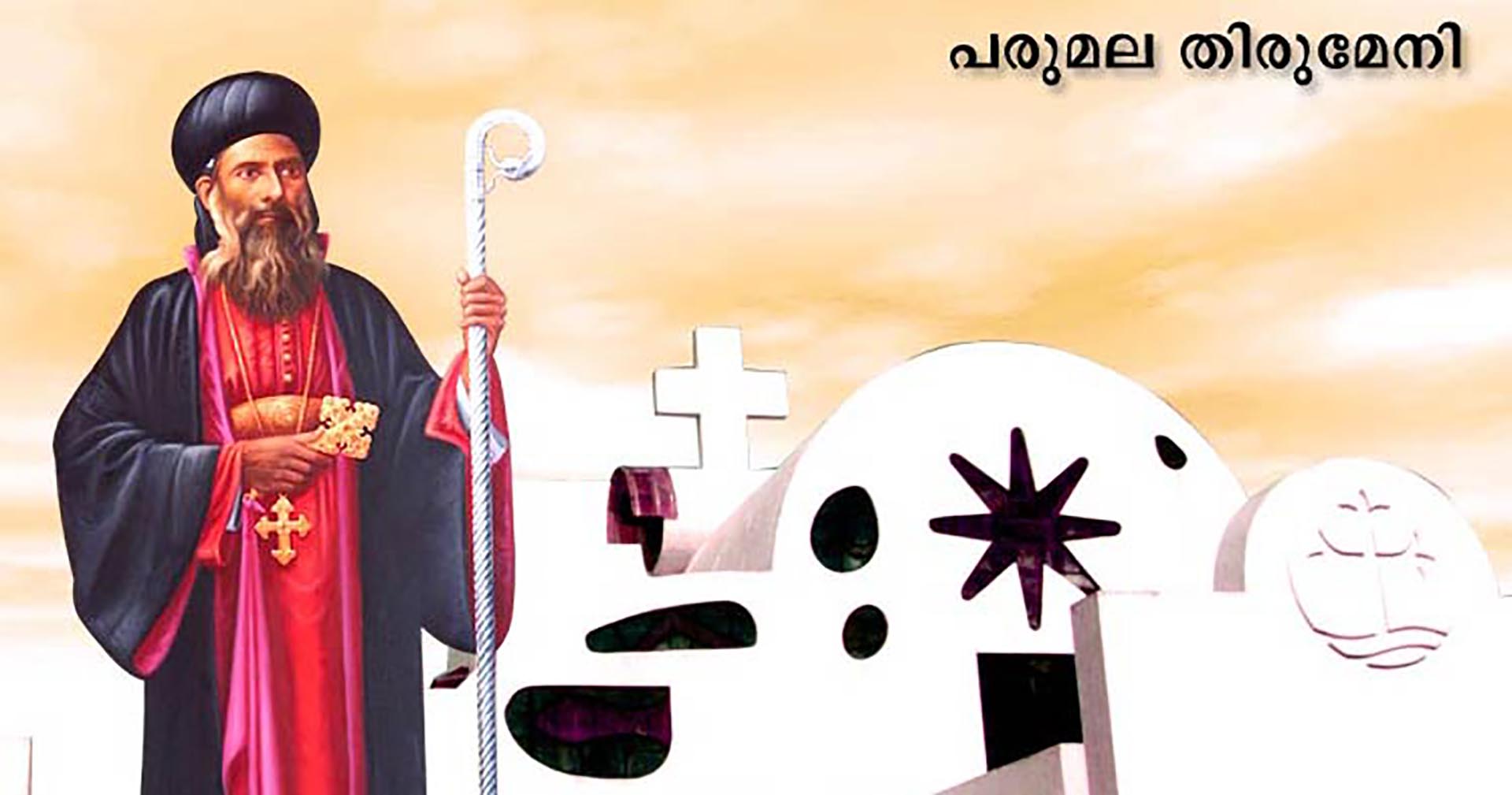 Tomb of St.Gregorios at Parumala Church

Parumala church is the tomb church of Saint Geevarghese Mar Gregorios or Parumala Thirumeni. He died on 2 November 1902 at the age of 54. The funeral was conducted at Parumala on 3 November 1902 in the presence of thousands of people and hundreds of priests. Many testimonies to the saintly intercession of Mar Gregorios made Parumala Church and the tomb a centre of pilgrimage.In 1947 Mar Gregorios of blessed memory was declared a saint by the Catholicos of the church, Baselios Geevarghese II

St. George Orthodox Church is a prominent church that belongs to the Malankara Orthodox Syrian Church. This church is situated beside the Puthuppally-Changancherry road about a kilometre from the Puthuppally junction, on the eastern bank of the Kodoor river. The surrounding areas of church are panoramic and very beautiful. The old church was well preserved church with wall murals dating back to ancient times. These unique wall murals have been painted using vegetable dyes.

Bharananganam, 5k.m. from the town of Palai, is a name which is synonymous with St. Alphonsa, the first saint of India, who was a pious nun. The mortal remains of St. Alphonsa are entombed here at the St. Mary’s Church, now a very famous pilgrim centre of national fame.

Edappally, about 10 km. away from the city, is famous for the St. George Forane Church, one of the oldest Roman Catholic Churches in the state. The church, popularly known as Edappally Pally, was a small structure at the time of its construction in 594 AD. In 1080 AD.

Chandanapally literally means the abode of sandalwood trees. The first church in Chandanapally was built in 1810. It was renovated in 1875 and consecrated by his holiness Mar Abdullah, the Later Patriarch of Antioch. The wooden planks for the new church were brought from the kodumon forest. There was a reconstruction in 2000 which is famous for the huge size of its structure. Indo-Sarsanik art of sculpture was used in its construction.

Church celebrate its feast on 7th & 8th May every year

Chembuduppu (meaning picking of copper vessel) is a special ritual that has a place in Kerala’s cultural history. When the old church was built two centuries ago,local Hindus brought rice from different places to feed hundreds of voluntary labourers. They cooked this rice on the bank of the stream and ceremoniously served it to the volunteers. It is in memory of this event that the "Chempeduppu" is celebrated every year.


The mortal remains of St.George(Geevarghese Sahada)

This is just 1 kilometre from Thripunithura. The church is supposed to be even older than St Mary’s Church. Though the structure was rebuilt, the roof and other woodworks of the earlier structure are still visible. This church is on way to the Hill Palace.

St. Mary's Church, Kudamaloor, 7 kilometres north of Kottayam town, dedicated to " Mukthiamma" (Our Lady Of Liberation),. is one of the ancient churches of Kerala and a Marian Pilgrim Centre. "Alphonsa Bhavan" - the birthplace of St. Alphonsa comes under this parish, as also Mannanam, a pilgrim centre.

At a distance of about 2 kms from Trivandrum Central Railway Station, Sri Padmanabhaswamy temple is a famous Hindu temple dedicated to Lord Vishnu, located in the Fort Area. The temple is one of the 108 Divyadesams of Lord Vishnu. The main deity is seen in reclining position over the serpent Anantha or Adi Sesha. The temple depicts a blend of Kerala and Dravidian styles of architecture

Chavara Bhavanam is the ancestral home of Blessed Kuriakose Elias Chavara (Chavara Achan). It is now a shrine and spiritual resort, where thousands of devotees, travellers and tourists gather to pray and seek favors. At Chavara Bhavanam, a 250-year-old, historically important beacon of light is preserved intact in its original.

At a distance of 20 Kms from Kottayam, St.Mary's Forane Church (also known as Martha Mariam Church) is located in Kuravilangad, on the way to Muvattupuzha.

At a distance of 39 Kms from Pathanamthitta & 10 kms from Thiruvalla, St. Mary's Orthodox Syrian Church located in Niranam (popularly known as Niranam Valiyapally) is a parish under the Niranam Diocese of the Malankara Orthodox Syrian Church. Founded by St. Thomas in 54 AD, this is one of the most ancient churches in the world. It also contains the mortal remains of St. Thomas.

At a distance of 45 Kms from Kalpetta, 28 kms from Irupu Falls & 22 kms from Mananthavady, Thirunelly Temple is located in a beautiful valley beneath Brahmagiri hill range close to Kerala - Karnataka boarder (near Kutta, close to Nagarhole National Park)

At a distance of 11 Kms from Kottayam Railway Station, Mahadeva Temple located in Ettumanoor is one of the most celebrated Siva temples in Kerala. This is one of the popular tourist & pilgrimage sites to visit near Kottayam & Kochi. 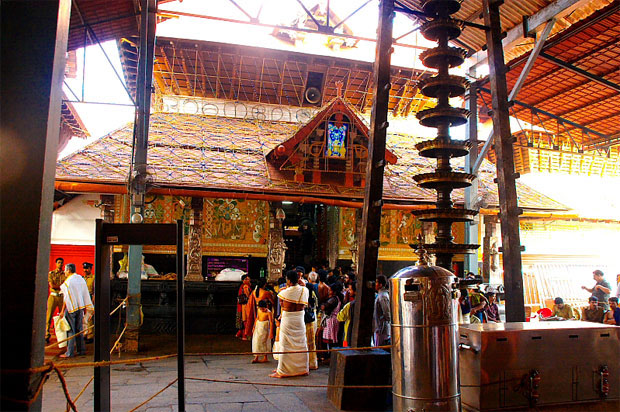 At a distance of 27 Kms from Thrissur & 81 km from Kochi, Guruvayoor is well known for the most famous Sri Krishna Temple in South India. This is one of the most popular pilgrimage sites in Kerala & an ideal getaway from Kochi.

Mannadi, about 13 km away from Adoor is famous because of Velu Thampi Dalawa, a freedom fighter who sacrificed his life for the nation. The stone sculptures in the ancient Bhagavathy temple are remarkable. The annual festival is the Ushabali, held in February/March. Kalabali, Pooppada, Kaliyoottu, Adu vetti kurithi, Kalamezhuthum pattum, Navarathri kuruthi, Villu Pattum Kuruthi, and Ponnummudi Ezhunnellipp are the other important festivals of the temple.

Mannadi Bhagavati, is the family goddess of the Pandalam Royalty. Raja on his way to Sabarimala worships in this temple. There are many legends on the origin of this ancient temple. According to one such belief, Bhagavathy is 'Self Appeared' in this temple. An old lady was collecting grass from the present temple premises centuries ago. When she rubbed her sickle for sharpness on a stone, blood started oozing out from it. People gathered in the place and one of them suggested to beat the sand with force on the stone from which the blood was flowing. And when they did so the blood stopped. Thus the name 'Mannady' ('annu'means Sand and 'Ady' means beating).

Then the Perakkattu potty who reached the place announced that the stone is Devi "Self appeared" and the Velichappadu announced that the Devi is "Bhadrakali". The temple became famous as time passed. The river Kallada is flowing closely nearer to this sacred temple. The customs and traditions in this temple are peculiar and unique to this temple.

The Kerala Institute of Folklore and Folk Arts functions here.

At a distance of 14 Kms from Pathanamthitta, Maramon Convention is held on the banks of River Pamba in Kozhenchery town (near Kozhenchery Bridge). With participation of more than 200,000 devotees, this is the biggest Christian gathering in Asia. 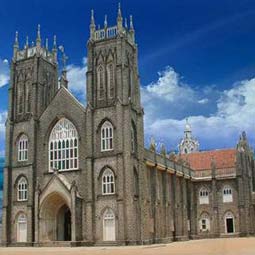 The Saint of Arthunkal (Arthunkal Punyavaalan) draws thousands of devotees from various religions. St Sebastian's church here is an important Christian pilgrim centre. Arthunkal Perunnal, the annual feast of the patron saint St Sebastian, is celebrated in mid-January. Situated on the seashore, this is a family picnic centre, too. Fishermen.

Built in the year 928, Mapranam Holy Cross Church Thrissur is one among the oldest Catholic churches in Kerala. The 1000-plus-years old church, one of the major Christian pilgrim centers in Kerala, was recently rejuvenated in 1989. Relics related to the crucifixion of Jesus -including the Holy Cross.

At a distance of 13 km from Ernakulam Junction (South) Railway Station, St.Francis Church is the first European Church built in India. It is located on Parade Road in Fort Kochi, less than 1 Km from Kochi Beach.

At a distance of 3.5 Kms from Trivandrum Central Railway Station, Attukal Bhagavathi Temple is one of the famous temples in Kerala and famously known as the Sabarimal of Women.